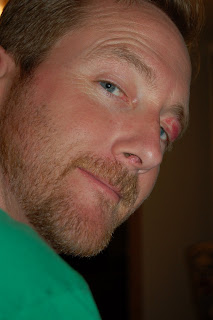 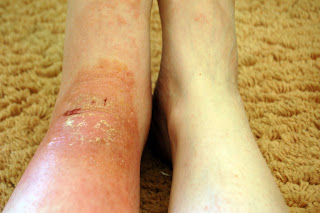 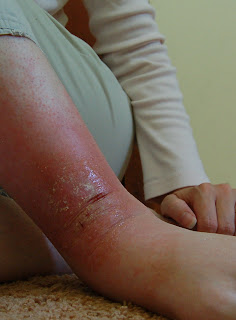 I have been devoloping a rash for about a week that has gradually crept over my entire body. My left ankle is by far the worst looking, but it is the rest of me that itches non-stop. I'm on Benadryl and Steroid cream, but the Dr. is at a loss to what has caused it or if this will even get rid of it. To be honest, I'm discouraged and sad. I know God isn't "picking" on me, but things like this always happen at the worst times. Please pray that this goes away quickly and never returns, even if we never figure out why it came. Thank you!
(Forgive the stubbly leg... I can't exactly shave right now) 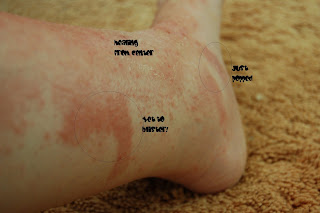 We've pretty much determined that this is a case of poison ivy. Although I don't remember being anywhere that I could have come in contact with it, I am told that if the Urushiol oil is on an animal whom you pet or if it is on you clothes and then you touch it it will cause an outbreak. It takes 1 NANOGRAM to cause a rash! 1/4 oz could cause a rash on every person in the world!
I'm feeling a bit better and my ankle is clearing, but the rest of the rash is still itchy and covering 9/10 of me. Please keep praying, I would love to get on with life!
Posted by Deeapaulitan 5 comments:

Of Daughters and Sisters

Minda. I have always loved that name. It means "gentle one" which doesn't exactly fit our girl. She is gentle, but she is more merriment, and chatter. I sometimes wonder what the feminine form of Isaac (laughter) is. Naming her "Laughter" would have pegged her. Children flock to both of my girls, but for different reasons. Cassia is beautiful and sweet. She talks to the little ones quietly and they are at ease and comfortable with her. Minda plays games, tickles them, talks in silly voices, and laughter is constant. Both have pint sized fan clubs. Anything under 3 feet seem to adore them! As a mom, I can't explain the pride I have in these 2 daughters of mine.
One of the greatest blessings is their love for eachother. They are dearest friends as well as sisters. Cassia took Minda out for a birthday shoot. Minda had just bought a vintage dress for $5 at a sale and was twirling and flitting. (who says 14 can't be fanciful?) They stayed the night with eachother, bought sweets for eachother, and were given up to jollification for the better portion of the evening.
God has been so gracious and merciful to us as parents. In spite of all our faults, shortcomings, and sins, He has kept them at the center of His palm and He has their hearts. Thank you, Jesus!

Photos below
Posted by Deeapaulitan 2 comments: 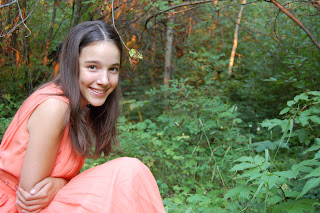 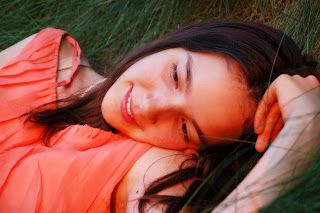 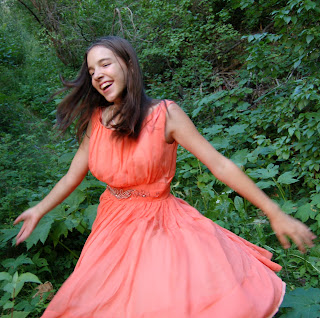 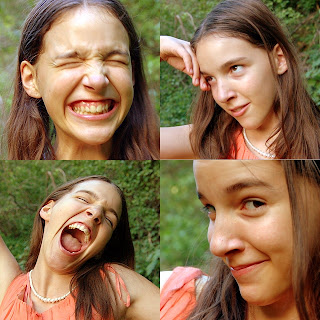 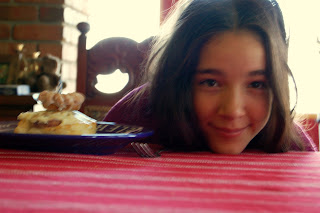 More to follow soon... I have a party to get ready for!
Posted by Deeapaulitan 2 comments:

In the Good 'Ole Summertime

Summer came upon us withcrushing force this week. It was overwhelming at times. (think of that scene in Star Wars when they are all in the garbage compactor and Luke keeps getting pulled under by the garbage monster and then the walls start moving in on them...) Bozeman isn't used to hot, or dry so most of the homes are built without air conditioning ~ ours is no exception. 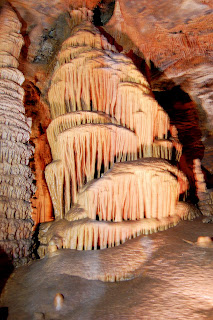 Even though the last few weeks have been stiflingly, chokingly hot, we have had nonstop company!!! I'll give you the "Last two weeks in the Life of the Paul's " tour! Sabrina came to visit again. She'll be a full time student in the fall and won't have vacation pay, so we made the most of it. We walked through her childhood memories, retracing some of the places she visited as a tike. Lewis Clark Caverns was one. We spent a very Hot day underground wandering though 52 degree F. caves and passageways. The Nympho Bats were a bonus. 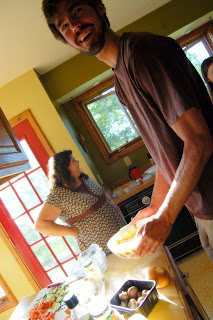 Luke is a Prof at MSU and a dear friend. He also spent two years in Korea teaching English to 6-9 year olds. While he was there a youth group adopted him and would come to his apt. where they would cook together. He attends church with us and is on the worship team with James; plays a mean trombone, man. We had been trying to get together for weeks to have him cook Korean for us and it happened to work out while Sabrina was here. It was a great evening of delicious dishes, laughter, fellowship, reminiscing and pain. Both Luke and I ended up with battle wounds by the end of the night. He had a 2" sliver through his big toe, and I had a deep cut at the base of a fingernail that took 45 minutes to stop the bleed.

I am not a Yellowstone fan. I know of better things to do with my time than walk through heat and stink to watch water shoot up out of the ground, then get back in the car, drive, park, walk through more heat and stink to see mud boil or gaze at pretty rocks. This is the one formation in Yellowstone that captures me. The Grand Prismatic Spring. This I will glady put up with the stench and billowing heat waves for. Sabrina's company was the highlight of the day for me. I love that chicky. 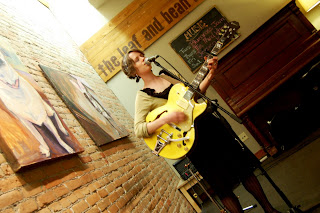 Bozeman is no Seattle or Portland when it comes to the Indy Music scene, but they do support & encourage their artists by giving them stage and audience. A friend's little sister was in town performing at the Leaf and Bean and we went down to be her fan club!

That's not all, keep reading... 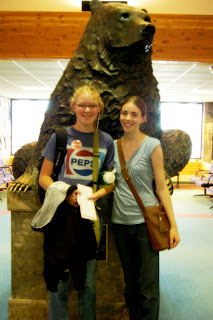 Our sweet friend, Kelly, took off to fly around the world to Laous where she will be teaching English, watching kids, and spending time with her brother and sister-in-law. Cassia and I went to the airport to see her off. Ironically, after having her photo taken in front of the bronze bear, a few days later Cassia got to see a brown bear up close and personal. Checking into why Cricket wouldn't stop barking one afternoon, she came face to face with a cub on our porch. She was the only one home. James told to her to, under no circumstances, go outside and to keep the doors locked. :o) Something tells me she wouldn't have set even a pinky toe on that porch! 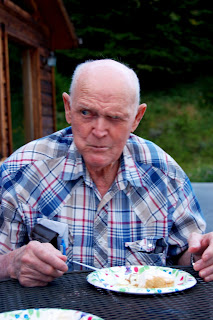 My mom and grampa came to visit just as Sabrina was heading for home. I wasn't sure what to expect not having seen Grampa in 2.5 years and knowing he was in the stages of Alzheimers, but God is so good. He and Minda were 2 peas in a pod. It was like watching myslef 23 years ago as they cajolled, laughed, told stories and played games. I had the man I grew up with right there with me for 5 days! 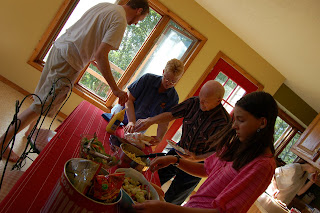 On the 4th Mom and I made Grama's potatoe salad, a fruit salad, & a green salad. I BBQ'd pork steaks and Brats (to perfection I maight add!) and we had chips and homemade salsa! It was one of those terribly hot days so we loaded up our plates and retreated to the basement to eat. Later that night we had some friends over for games and fellowship AND a family tradition!!
read on...

The Good 'Ole Summertime Rolls On... 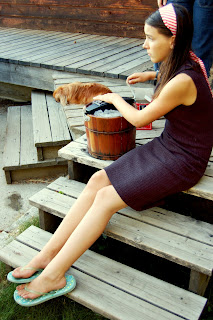 Homemade Ice Cream!!!! But! There is a catch - You don't Crank, You don't Partake!! Everyone has to get in on the action, and it is soooo yummy! 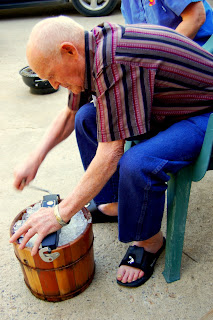 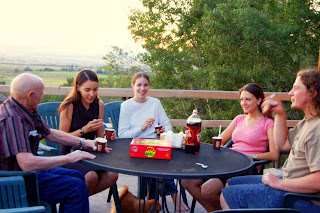 We had Nathan (college pastor) and his fiance' Robin over for the fireworks and rootbeer floats! It was a beautiful night (Other than mine and Robin's allergies punctuating the minutes with sneezes and nose blowings! ) 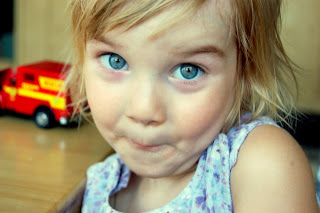 Matt, Sara, and Bella are home!!!!!!!!!!! Not for long, but we got to spend an afternoon walking, talking and drinking Iced Soy Chai at Rockford!

More of the Good 'Ole Summertime... 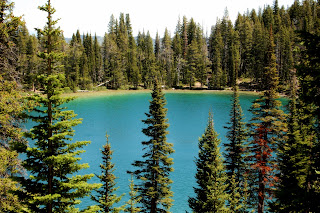 Some of our hikes have included Fairy Lake (above) where the drive in was as much of an adventure as the hike. We picniced on the rocks where the wind couldn't reach us, but almost killed Sabrina in the climb... Don't worry, she survived to eat my incredible wraps... 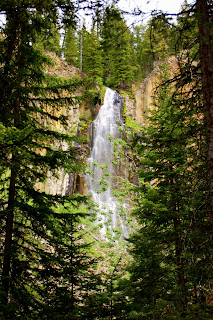 We also picniced at the Palisade Falls campground with my mom and grampa. Then we hiked to the falls. Grampa is 87 and not spritely, but James was his faithful steward and got him to the top. We met a 94 year old coming down! He and Grampa swapped insults and jabs about the war and the Navy. If the Horse Flies would have been less emassed, this would have been perfect. It's hard to have fun when you are so concerned about getting bit! 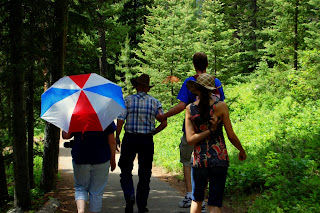 On the way back from Palisade we stopped at the campground and surprised Tof. We got to sit with him for a half hour and listen to what God has been doing in him during the last two weeks. He hugged his sisters tight and then grabbed their hands while we walked to the Mess Tent to get out of the heat. Does a mama's heart good. *sigh* 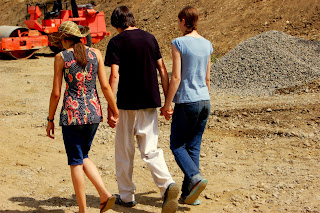 Hope everyne is having a blessed summer! Remember that our place is yours! We'd love to lay eyes and hugs on you! Nothing would make us happier!
Posted by Deeapaulitan No comments: